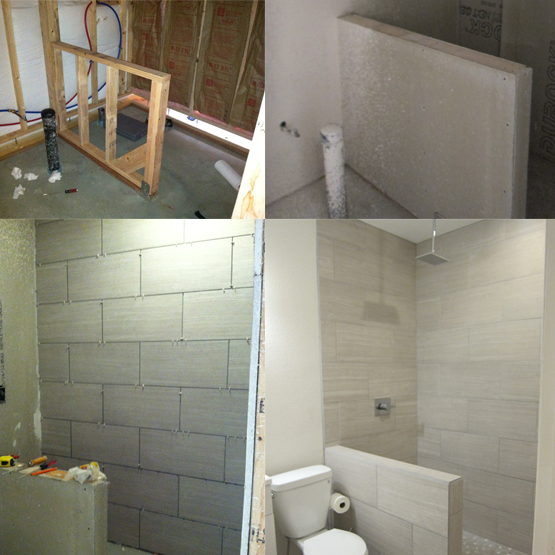 Looking to finish off your basement and include a bathroom? Interested in learning more about PEX plumbing and its advantages? How about tiling your basement bathroom shower like a wild man? Welcome my friend. Grab a Fat Tire because this post is for you.

Moving the plumbing was something I didn’t have to worry about because we decided to put our basement bathroom right over our rough in pipes. I’m not going to get in-depth on this because I don’t have the experience, but if you do have to move your basement bathroom plumbing don’t let this project scare you. Here’s a decent introductory video on what it would look like to bust up your concrete slab and install the bathroom plumbing: https://www.youtube.com/watch?v=dKfQDiu0qhU 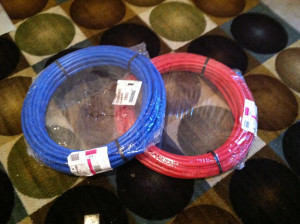 Let’s jump right in with my decision to use PEX pipe for my basement bathroom plumbing. I made this decision for a few reasons:

1) It’s Flexible
– That means I didn’t have to worry about soldering a joint every time I needed to make a turn, like you would have to do with traditional copper pipe. This also reduces the chances you’ll have a weak joint in your plumbing because you won’t have any!
2) Saves You Time
– As a result of not having to solder at every turn, you save an INCREDIBLE amount of time installing PEX piping. If you’ve followed any of my other posts I’m big on saving time and this is a huge time saver.
3) Saves You Money
– PEX pipes are cheaper than copper piping! Enough said.
4) PEX Pipes Less Likely to Freeze
– If you live in an area where you’re subject to freezing temperatures, you’re probably familiar with frozen pipes. Say goodbye to frozen pipes with PEX. The flexible nature of PEX plumbing allows water to freeze and thaw typically without any issues.
5) PEX Has Proven Itself
– If you check into the history of PEX, this stuff was used way back in the 30’s. It was primarily used in commercial construction and in the 2000’s it became standard for plumbers to replace copper piping with PEX piping. 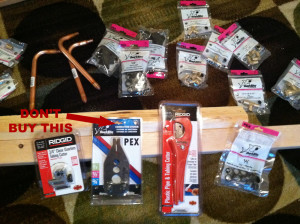 – Check out what I needed for my basement bathroom plumbing project. Notice the really crappy PEX crimper I initially bought to try and save some money. It didn’t work at all, so I ended up spending more money on the heavy duty PEX crimper tool.

– Here are the tools I highly recommend for your project:

– Everything else you’ll need is pictured but these four tools will make your basement bathroom plumbing project much easier.

2) Turn Your Water Off, Drain Your Pipes
– Don’t make this rookie mistake. Cutting into your existing pipes without turning off the water first is a recipe for disaster, one that wouldn’t be very easy to explain to your wife.
– First turn your water off then turn on all the sinks, showers, tubs, in your house until your pipes are clear of water. 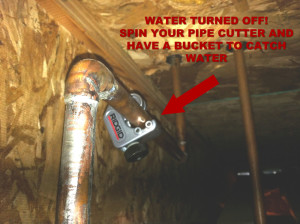 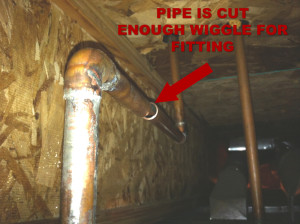 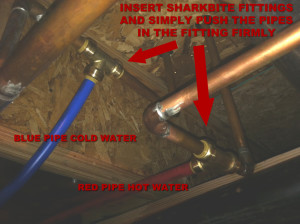 – My pipes had enough wiggle to allow for the SharkBite fitting to fit firmly in place where I had cut the copper pipes. You may want to cut a small section of pipe away to ensure the fitting is seated correctly and not causing your copper pipes to bend.

PEX in the Basement Bathroom 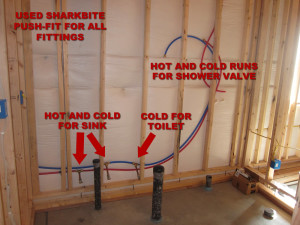 After you’ve tapped into your existing plumbing, run your PEX piping through the wall behind your basement bathroom sink, toilet, and tub/shower. Again I chose to use the SharkBite push-fit fittings for both the sink and toilet. The shower valve I purchased came with PEX barb fittings, which in turn require metal rings and a crimping tool to ensure a solid fitting with no leaks. I decided to run a small copper pipe from inside the wall so instead of seeing PEX pipe coming out of the wall you saw a copper pipe. 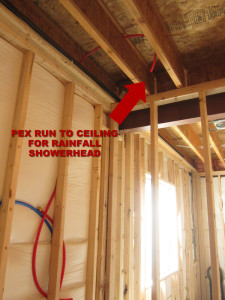 I then made one additional run of PEX piping from the shower valve location up into the ceiling joists for the rainfall shower head. You can see I also capped off the hot and cold runs with SharkBite push-fit plugs so we could turn our water back on.

Shower Valve
This is one section in which I didn’t take enough pictures so I’m going to walk you through what I purchased and how I mounted my shower valve.

Here’s a great video on mounting the shower valve with PEX piping along with using the crimping tool that I suggest purchasing. Every situation is different, but understanding the gist of mounting the shower valve and using the crimping tool is the most important part. Once you understand that it’s a very straightforward project.

More to come on how to install a bathroom exhaust fan.

Stay tuned as I post more updates on finishing the basement bathroom, including tiling the VIP shower!